A dinner with the siblings

I’ve been sitting on this post for ages and just haven’t had time to get it done, but it’s definitely time.  I have two wonderful siblings, a sister and a brother.  We’re very close in age and have a great relationship with each other and at the moment we all live in Melbourne.  In turn my siblings have found themselves fantastic partners who fit into our family perfectly, though they are quite different.  We try to gather regularly for a meal (brunch, lunch or dinner).  Lately these have mostly been hosted by me as it just seems easier with the two girls to have everyone here so they can sleep or play in their own environment.  It also helps that everyone can fit around the table at our place.  We had one such meal a little while ago after we got back from the beach.  It was the first since just before Christmas so it was lovely to see them all together.

While we had been away I had bought some locally caught and smoked seafood – mussels, whole trout and ocean trout fillets – which I wanted to use and share.  I made a lovely dill and smoked trout dip as well as serving the mussels simply with a slice of cucumber to start with.  With the remaining piece of ocean trout I decided to have a go at making my own sushi (probably not authentic, but I thought it would be a nice combination).  I’ve never made sushi before, but didn’t think it would be too hard.  When I told my sister my intentions (I had roped her into helping with the cooking), she looked a little skeptical.  I started to think perhaps this was out of my league.

Once I had decided on the sushi I turned my attention to what else I would serve and had the idea to make the meal a Japanese theme.  I love Japanese food, but never cook it, have little experience with the ingredients and have always been a little intimidated by it – as well as having very few Japanese recipes.  After trawling through my Asian cookbook bible, I decided on the sushi along with Yakitori (chicken skewers) followed by Gomoku Yakisoba (Five-flavour noodles).  The last dish was a simple pork and soba noodle stirfry which was not nearly as impressive as the rest of the meal, but was very tasty and easy to make. 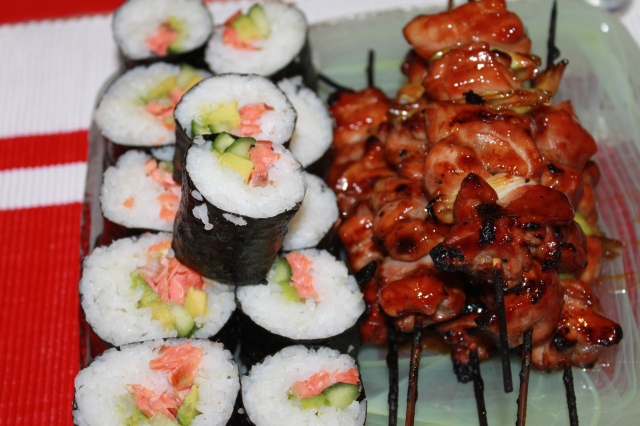 I am a complete sucker for those sushi chains popping up all over the place, but I must say I think mine were just as good in flavour if not quite so perfect in appearance.  Eaten with a little wasabi and pickled ginger as well as sushi soy sauce, they were fantastic and not too tricky to make.  Yakitori sticks are also a favourite, I love their smoky, sticky sauce and these ones did not disappoint.  My sister was in charge of the sauce and Mr Good did the bbqing and basting so the praise is all theirs for these ones.

I didn’t photograph the noodle dish, but I thought I would share the recipe anyway.

Cook the noodles according to packet instructions (I used dried ones and cooked way too many)  Drain and leave aside.

Cut pork into strips and season with salt and pepper.  Heat 1 1/2 tbsp of oil in a large wok, stirfry pork until just cooked and then remove.

Wipe the wok clean, heat the remaining oil and add the ginger, garlic and cabbage, stirfrying for about a minute.  Add the beansprouts, and then the peppers.  Continue stirfrying for another minute before returning the pork to the wok.  Add the noodles, stir through and finally add the seasoning mix, stirfrying for a further 2-3 minutes.

Serve immediately with the ao-nori seaweed sprinkled on the top (I didn’t do this).

I was a little worried about the number of salty ingredients in this recipe, but it wasn’t overly salty by the end.  In fact it was really very nice.

And with all those left over soba noodles I made this which was perhaps even nicer than the above dish.

As for dessert, my Asian cookbook bible only offered up one Japanese dessert, a ‘cake’ involving boiled eggs, frozen peas and sugar.  Hmmmm, perhaps not.  I opted for Donna Hay’s chocolate mousse, I am completely addicted to chocolate at the moment.  Rich, but delicious and a nice way to end the meal.

My brother did suggest I could do a different nationality theme every fortnight.  I would love to do this, but perhaps a little less regularly.  Mr Good had to take the girls to the zoo so I could cook and clean in peace, I’m not sure he’d be up for this every other week.  But after all the cooking for the toddler and focusing of family friendly meals that are quick, easy and require little skill, it was nice to tackle something a little different and more challenging.

This entry was posted in cooking and tagged cooking, Japanese cooking. Bookmark the permalink.

2 Responses to A dinner with the siblings