In my search for interesting ways to use the slow cooker, I discovered this idea on Pinterest and pinned it immediately meaning to give it a go at some point.  I’m a bit of an ad hoc Pinterest user so once I had pinned it I promptly forgot about it and moved on to other things.  Then as I was pinning another recipe (which I have no recollection of now either) I saw the photo of all those alfoil wrapped spuds and the idea came back to me, this time on the perfect day as I was writing my meal plan and shopping list, so baked potatoes made it’s way onto the weekly menu.

A simple baked potato topped with butter or sour cream and chives make a delicious side dish, snack or lunch, but get a bit more creative with the toppings and the spud becomes a meal in itself.  The toppings are limited only by your imagination really and having done a bit of research I discovered some people’s imaginations are far more active than mine when it comes to potato toppings.  Tuna and corn sounded like a winning combo, as did egg and cress, but I was especially drawn to the cranberry and brie.  On the other hand cottage cheese and fruit really didn’t appeal.

Our spuds were teamed with a few different fillings, but all started the same way.  Firstly, the cooking process was a simple as it gets.  Wrap each one in foil and cook on low in the slow cooker for about 8 hours.  The next step was to scoop out the middle of each one, mash it roughly with some butter, whole-egg mayo, grated cheese and spring onions.  I then refilled each spud with this mixture and then everyone added their own toppings.  The options were some left over taco filling, left over fried rice, crispy bacon bits, and some coleslaw.  Baked potatoes are a fantastic way to use up left overs, chilli con carn, baked beans, bolognese sauce, the list goes on.  Not only is it perfect for cleaning out all the bits of left overs cluttering up the fridge or freezer, too small for a meal on its own, it also makes it an incredibly cheap but filling and satisfying meal. 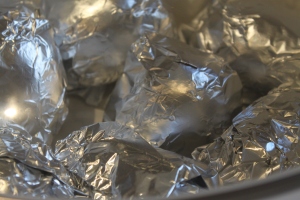 Using the slow cooker doesn’t make this meal any easier to prepare, you still need to do the scooping and refilling and get the toppings ready, but as that all only takes a few minutes it easily meets my criteria of having dinner on the table within half an hour of getting home from work.  I could never have this meal on a work night without the slow cooker however, as to bake the potatoes in the over would take an hour at least. A friend recently and wisely said that a slow cooker doesn’t make getting dinner any easier it just transfers the hard work part to a time that’s easier to manage – either in the morning or even the night before.  This has made a huge difference for me, and not just on work days.  Just knowing that dinner is basically done is a huge weight off my mind during the day.

So now that I’m sold on it’s benefits I’m looking to expand my recipe list.  If you’re a slow cooker fan or even just a fan of slow cooking in general (I have started adapting other recipes) vbnm,what are you favourite recipes?