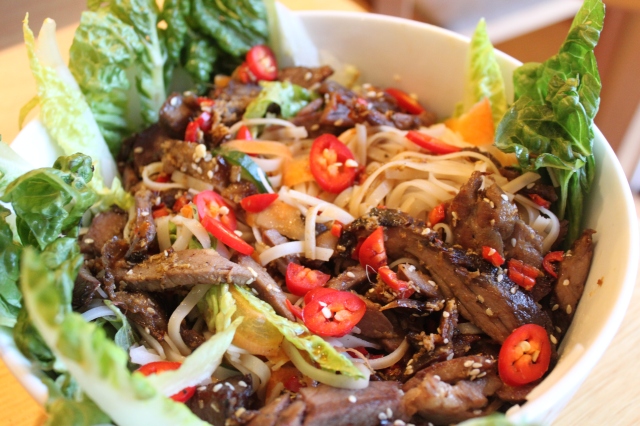 Sometime last year I won a copy of Jamie Oliver’s Save with Jamie cookbook through the Good Guys.  It has become a regular fixture on my kitchen recipe stand and has somewhat transformed how I think about food and cooking, especially the roast.  Sides are important additions to meals, not just last minute thoughts.  Sauces, gravys, dressings are a must and are generally pretty easy to whip up from scratch – his mint sauce for a roast lamb, yum!  The bigger the roast the better – so much scope for left-overs – and cheaper cuts with long, slow cooking make it a smart economic purchase.  Now I’m more likely to do a shoulder of lamb, than a leg, the chicken I buy is always the biggest I can afford (and usually free range) and planning the meals using left overs is exciting and new.  No longer do I do the standard shepherd’s pie or cold meat fritters – not that there’s anything wrong with these, but there are many other options – instead I whip out the Save with Jamie book and try to get a bit more creative.

Here in Australia, this last Sunday was Father’s Day and the request from Mr Good was a roast.  I had a lamb cushion in the freezer from my last lamb order (a friend and I split a lamb together a couple of times a year).  I hadn’t even heard of a cushion of lamb until this order, but after a quick explanation from the farmer we bought the lamb off we decided to give it a go.  A cushion is bascially a shoulder, bones out and then tied together to resemble a round cushion.  You can add a stuffing or filling to the centre before you tie it up, but ours was just the meat.  I cooked it for about 2 1/2 hours with some onions, beef stock and wine in the base of the roasting dish and covered with tin foil.  In the last hour of the cooking time I added potatoes that had been parboiled.  Carrots and pumpkin were roasted in a separate dish.  The foil was removed for the last 30 minutes to crisp up the spuds and the top of the roast.  The juices at the bottom of the pan made a lovely gravy.  After we had all eaten our fill of meat and veggies, I had about 400g of meat left over.

This is where I hit the cook book and see what appeals.  What I love is that most of the dishes using left over meat only require about 150-250g of meat and are very adaptable, add more veg if you’re light on meat or vice versa.  Some use up left over gravy as well – very useful considering I always make way too much.  This time around it was Jamie’s Punchy Crunch Lamb Noodle Salad that was calling my name.  The girls love noodles and the weather has started to warm up a little (though you wouldn’t know it today!) so salads are on my mind and while it does have a bit of chilli I thought it would be easier enough to make a small portion without the heat of the chilli that Miss Five is so fervent in her hatred of – Miss Three doesn’t mind it at all.  It turned out to be a very good decision, dinner was a hit!

2 thumb-sized pieces of ginger, peeled and grated
1-2 red chillies (I stuck with one, but could easily have put a second in)
8 tablespoons of olive oil
4 tablespoons red wine vinegar
4 tablespoons soy sauce
300g medium rice noodles
2 carrots
1 cucumber
2 gem lettuces (these seem to be like mini cos lettuce here)
1 round lettuce (I only used the gem lettuce)
1 bunch of mint
250g leftover cooked lamb
1 tablespoon of sesame seeds
1 teaspoon of honey (this was my addition, not in the original recipe)

Add the grated ginger to a bowl with half the chilli (Jamie grated his, but I find this tricky, so just finely diced mine) oil, vinegar and soy sauce.  Mix and then set aside.

Put the noodles in a bowl and cover with boiling water, then leave for 15 minutes or until tender.

Speed-peel the carrots into long thin ribbons using a vegetable peeler and slice the cucumber however you like.  I really should get one of those cool crinkle cutters, instead mine were plain half circles of cucumber.  Add both to a bowl.  Trim the lettuce and then cut into wedges – I love this way of slicing lettuce, it gives the salad a sort of structural appearance – and add to the bowl.  Then pick over the mint leaves and add those too.  Drain the noodles and add to the bowl.

Shred the left over lamb and put it into a frying pan on a high heat with the sesame seeds.  This is where I varied the recipe a little.  In the book Jamie’s lamb looks dark and glossy which I just wasn’t getting, plus mine seemed a little dry.  So I initially added a tiny bit of the lamb dripping I’d kept from the roast (another great tip of the book) and then I added a teaspoon of honey, which gave the lamb a bit more moisture and that lovely glossy look.  The honey also works with the chilli, ginger and vinegar in the dressing.

Mix the dressing up again, then drizzle over the salad and toss well.  Finely slice the last of the chilli and scatter this over the salad.  Finally top with the lamb and sesame and serve.

This recipe serves 4-6 people, but as it was just for two adults and two kids I reduced the quantities a little.  I also made a small non-chilli version for the kids using a third of the dressing ingredients.  Like I said his recipes are very adaptable and this would be equally great with some snow peas or other crunchy veggies so play around with it.  Lastly, even though I made a smaller version we still had plenty leftover (leftover, leftovers!).  It holds up pretty well to a day in the fridge and is excellent “wodged”, as Jaime would say, into a wrap for lunch.

This entry was posted in cooking and tagged budget recipes, cooking on a budget, Jamie Oliver, lamb recipes, lamb salad. Bookmark the permalink.