Miss Four – I am a Whoo-man

Okay, time to brace yourself for a second entirely indulgent post about my children, this time, the younger, Miss Four.  After all it’s only fair that I redress the imbalance.  One day I will print these posts out for my two girls to read about themselves.  That might make up for the fact that I never kept a baby book for either of them (does that make me a terribly neglectful mother?) 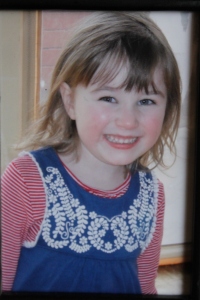 Miss Four is a creature of stark juxtaposition, a complex little being that leaves me guessing and puzzling over late at night.  In many ways she is like me.  Stubbornness that knows no bounds, a somewhat explosive temper (though thankfully her tantrums tend to be confined to the home or Nana’s house), she is one who knows her own mind and will not have it easily changed.  I’m sure that will hold her in good stead in years to come, but it does offer up certain challenges for us as parents right now.  She is incredibly cheeky, a complete stirrer and very, very funny.  I often call her my cheeky monkey, her reply “No Mum, I am a Whoo-man (Human)!”

In complete contrast to her sister, she is born to be a vegetarian (and gardener, she like to dig in the dirt and help me plant and pick).  She dislikes just about all meat, she will swap a chop for a few bits of broccoli with her sister any day.  Mushrooms must go in everything.  I kind of love this about her, but I do worry about her iron levels as she grows.  And growing is something she does quite slowly – she is the embodiment of the term Pocket Rocket.

For some time now Miss Four has been desperately holding on to the baby role.  I remember when I first brought her home from the hospital I wanted to hold her close all the time.  It was a feeling from somewhere deep inside, I didn’t want others to hold her, and it was something I couldn’t shake.  Perhaps I knew then there would be no more babies and I had to breath in every moment I could.  And perhaps I somehow passed that sense on to her.  She has been reluctant to move on at just about every point, toilet training was traumatic (and still not complete), talking started beautifully then stalled for a long time (we’ve just finished a series of speech therapy sessions that have made a big difference), she just loves to be carried and getting her to sleep in her own bed has been an ongoing battle.  When she does end up in with me (a fairly regular occurrence) she sleeps with both arms wrapped around my neck like she’s worried I’ll sneak out and leave her.  She doesn’t want to let go!  We still have an incredibly close physical bond (at times it borders on clingy). But of course in true Miss Four style, she really doesn’t like a lot of physical contact from others and hates kisses.

When I think about what the future holds for these wee conundrum of mine, I really don’t know what to expect.  I know she will love Kinder, lots of kids to play with (she’s very social) and mostly playing in her own way without too much direction which is just the way she likes it.  Plus lots of time outside, also a must for her.  School, on the other hand, worries me a little.  Bending to someone else’s ways may prove a challenge.  I worry that I haven’t read enough to her (not something that even crossed my mind with Miss Six) because she’s less interested in books than her sister and doesn’t sit for long anyway.  I worry that she speech will delay her in other ways. I worry that her fine motor skills are not what they should be.  In short, I worry.  I hope my worrying will be unwarranted.  You know, it would not surprise me if the exact opposite turns out to be true and she flies at school.  I just don’t know what will happen, that just about sums up Miss Four in many ways.

This entry was posted in Uncategorized. Bookmark the permalink.