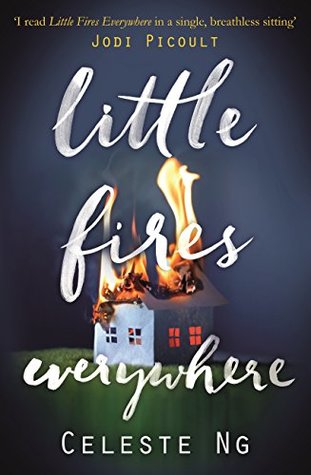 Two years ago when I was working four days a week, studying part time and trying to keep on top on the house, get the kids fed, clothed and where they needed to be when they needed to be there, I got home one afternoon to an empty house but that was in such a state of utter chaos that I turned around and walked out again. I was disgusted and so, so cross that my family had left such a mess with an unspoken expectation that someone else (ie ME!) would clean it all up. I was furious and could not stand it any more so I wrote a terse note and then retreated to the library for the rest of the afternoon. I wandered the shelves and randomly picked up a book, then settled into a couch to read. Three hours later I stood, bleary eyed and utterly shocked that so much time had passed without me realising just how long I had been there. The book that so absorbed my attention that afternoon and took me far, far away from that messy house was Celeste Ng’s first novel Everything I Never Told You. I ended up borrowing that book and finishing it the very next day. So when I heard she had another book coming out, Little Fires Everywhere, I was waiting with much excitement. I even shelled out the money to buy my own copy – something I never really do these days – knowing that I would NEED my own copy. But I was strong and didn’t open it until I knew I had a day or two to devote long stretches to reading, uninterrupted joyful reading. And that’s just what I did a couple of weeks ago, getting through it in just two days. She did not disappoint.

The story itself revolves around two families, one a single mother and artist, Mia with her daughter teenage Pearl and the other, the seemingly perfect Richardsons, mother (Elena), father and four adolescent children. These two families’ lives begin to intertwine as Mia and Pearl move into the rental property of the Richardson’s and Pearl forms relationships with each of the Richardson children. The novel opens at the end of the plot line with the immaculately maintained, Shaker Heights house of the Richardsons burning to the ground as they watch on, minus one child. Ng then skips back in time to explain how, and more importantly, why this happened. There are long-kept secrets, long lost family members and the bitter fight for custody of a baby between the birth mother and foster parents.

The story weaves and winds its way through each of the characters, seamlessly switching perspective, offering the insights of parents and teens in turn. The skill of the writing is never more apparent than in this ability Ng has to change voices and show this intricate story from inside and out and it’s why I became so involved and emerged in this world.

In this case Ng has also selected a most intriguing setting, the planned and highly regulated township of Shaker Heights. This setting acts as an analogy for the boarder story. Elena has based her every existence on the plans and rules she has set for herself and her life, she has followed that plan meticulously, but – like Shaker Heights – all may not be quite so perfect under the surface. In contrast Mia is erratic, unpredictable, bohemian and transient, everything the Elena is not.

While Ng has expertly inserted herself (and then us as readers) into the minds of these two very different mothers, her teenage voice is equally as strong with the five young characters being fully formed, complex and nuanced – something missing in so many novels. These are not two dimensional plot devices but rather interesting and purposeful characters in their own right, offering a very different take on the scenarios they are emerged in or that are playing out around them.

I have no negatives to put forward, Ng is a masterful writer and I will read everything and anything she writes. And of the 50 plus books I’ve read this year, Little Fires Everywhere has taken the #1 spot. It will be very hard to knock it off the top spot from here.  What’s you’re #1 for 2017?

This entry was posted in Books, Uncategorized and tagged books, fiction books. Bookmark the permalink.